Info Center Kiosk in the Woods


Simple and easy to do, yet effective and too the point.  Communication one-on-one with recreational target shooters helps build a spirit of unification toward the critical goal of promoting responsible shooting on public lands.

On Sunday, May 31st, two Trash No Land members set up the Target Shooter Info Center booth and handed out information to over 60 people in 30+ vehicles.  We handed out Oregon State Rules for Target Shooting, our Trash No Land "Target Shooting on Public Land" brochure, trash bags, home printed paper targets, ear plugs and offered up a nice hot cup of coffee.

We set up next to the road so people could stay in their vehicle while we handed out the packets, spoke a few brief words and wished them a safe day packed with lots of fun.  Some did, however, prefer to park and come visit. 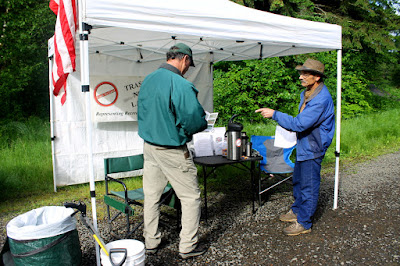 Part of the information and show-n-tell, was to promote fire prevention safety when target shooting.  It's best that people start thinking fire prevention before the fire season.

It was a good way to invest half a day to help further the cause for responsible shooting.

And the coffee was always hot! 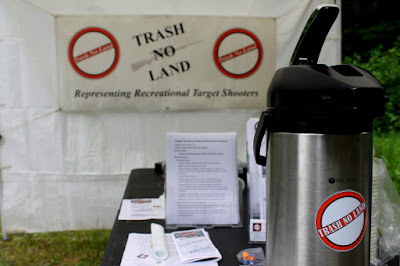 We would like to see this happen in forests throughout the Northwest.  Contact us to help you start one in your favorite forest!  info@trashnoland.org

These rules are very similar to WA State land rules but with more definition and some added restrictions, mostly dates you can use steel targets at dispersed sites and a steel core bullet restriction. I'm reading more confusion and long, drawn out wording I think could be simplified for better understanding and easier to read.

A few things that are defined and enhanced more than state rules:

Backstop definition: I see the problem all the time and many shooters don't seem to get the idea of a backstop. They are requiring a minimum of 8 feet high with a sharp incline (in otherwords; not a long gradual slope). The top priority is to stop the bullet from leaving the range area and a long sloping grade could easily skip the bullet up and over an 8 foot mound of dirt. Even a flat surface can skip a bullet over a shorter backstop. So, defining the 8 foot height and slope is a good idea.

Steel target time restriction: Again, to prevent wildfires. The East side may become drier sooner than the West site but if you were to have a different start date for each side, it may add more confusion to the already involved set of rules we have to learn. How much longer would it be delayed for the West side? Probably only 1 month because starting July, the West side gets real dry and fires can & do happen in any part of the state. You can shoot steel targets from Oct 1 to May 31. Perhaps look at it as the glass is half full rather than half empty.

Target stands: Further defining what is not a target stand, such as, power poles, fence posts, car parts, ect...

Clays defined: Many people automatically think clays are biodegradable, so, they clarified that.

So, how much can we argue with? It's all common sense and appropriate guidelines we already know (or should know) and it better clarifies specific areas that are commonly misunderstood or misinterpreted.

I don't see a need for outrage and anger over these improvements. It's not like they are restricting or trying to restrict our rights. They are trying to provide public safety and fire prevention. It's stuff we should already be doing. If we are to share the land with each other, and with other recreation users, we must make safety and fire prevention our top priority.

Bill
Posted by Bills' Blog at 8:55 AM No comments: