Where have all the shooters gone? 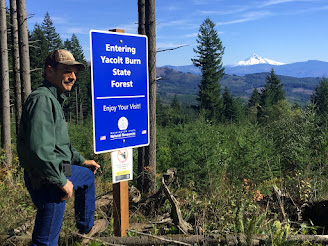 On Saturday, August 15th, 2020, target shooting was temporarily closed in all Washington State managed Forests, due to potential fire hazardous conditions.  One week later I visit the Yacolt Burn State Forest and I wonder...  Where have all the shooters gone?

When target shooting is open, there are lots of people out enjoying the great outdoors and recreating in the shooting sports.  But when it's closed, shooters disappear.  Why?  Why not be out in the woods and pick up a different kind of recreation? 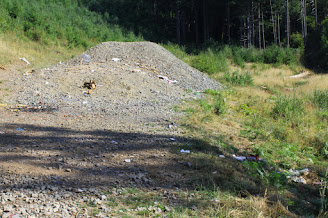 I mean the kind of recreation that shows our respect for recreational shooting on public lands.  It's called 'Maintenance'.  Clean up your local forest and show some responsibility for being a property owner who has a stake in our public land playgrounds. 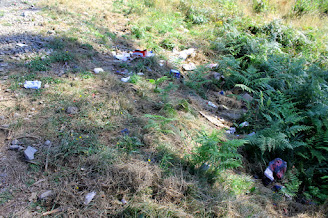 When it's closed, it's payback time!  This is a perfect time and opportunity to go out and show some good old fashion stewardship.  Your presents is needed in our forests throughout the Northwest!  Don't disappear now!

Honestly, we look pretty bad.  The volume of trash in the forest is mostly at sites where target shooting happens.  This should not be so!  Sure, some of it is dumping, but when it's full of bullet holes, it reeks of irresponsible target shooting.  Even if you didn't bring it, you sign our name to it when you shoot it.

With the recent increase in firearms sales, there are a lot more people in the woods learning how their new tools work and becoming more proficient in the shooting sports.  For many, this is their first time owning a firearm and their first time shooting in the woods.  Many of them are unaware of the rules for target practice.  It also seems that they must think; 'There are people who clean it up', so they leave it all behind.  WRONG!  Each person who recreates in the forest is responsible for removing their own trash and is also responsible for knowing the rules for their kind of recreation. 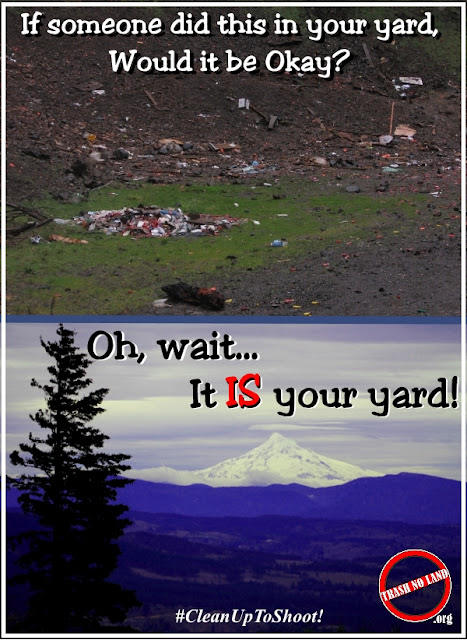 This was my 6 hours of recreation today.  No fun when you go out to enjoy a day off in the woods and see the volume of trash.  I couldn't just pass by and pretend I didn't see it.  And all that time, going from shooting site to shooting site, I didn't see one other person doing anything about it.  Where did you all go? 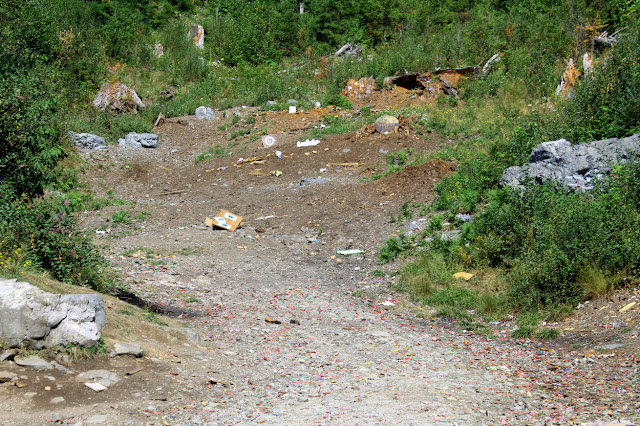 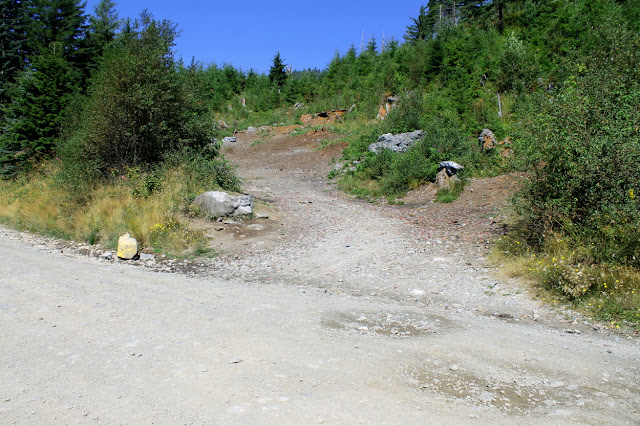 We've got to clean up our act, if we are to keep recreational sport shooting open on public lands.  Show some respect for the shooting sports, for the forest and for other forest visitors, by doing your part to give back for the good of recreation.

Information and Surprises handed out in the Capitol State Forest. Aug 15, 2020.

Five volunteers from Trash No Land and WaGuns.org website forum, joined in on a random grassroots effort to help improve the recreational shooting sports at the Triangle Pit in the Capitol State Forest, Saturday, August 15th. 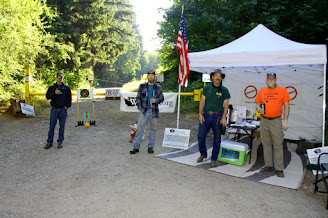 Our plan was to talk with target shooters, as they were on their way to target practice, and hand out information about shooting on public lands.  It was to be a hot day and we expected this gravel pit to be very busy. 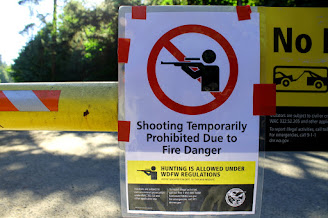 We were all set up and ready for the 9 AM opening of the pit, when a Forester drove up with a sign in hand.  "You're not going like this", he said.  He showed me the sign that said "Shooting temporarily prohibited due to fire danger".  It was like pulling the trigger on a fire extinguisher trying to put out our flame!  But it didn't work.  We stuck to our guns. (Yes, pun intended!)

We decided to stay because people may come to shoot and be just as surprised as we were.  So we moved up next to the road and prepared for some disappointed faces. 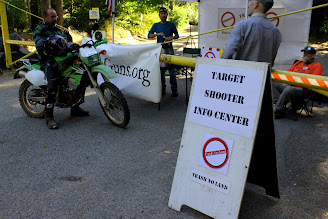 As it turned out, we had a busy morning of visiting one-on-one with many shooters.  We handed out the DNR rules (WAC laws) for public land shooting, Trash No Land information flyers, WaGuns cards and offered a hot cup of coffee.  Many recreational target shooters heard our message of being responsible, cleaning up and helping save good places to shoot. 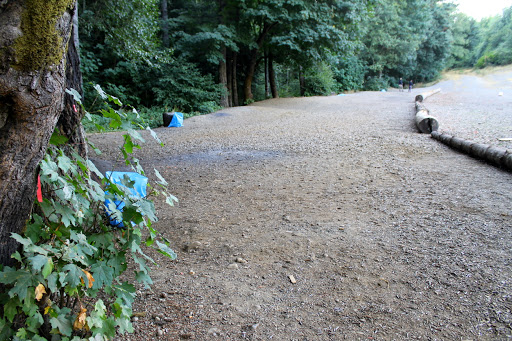 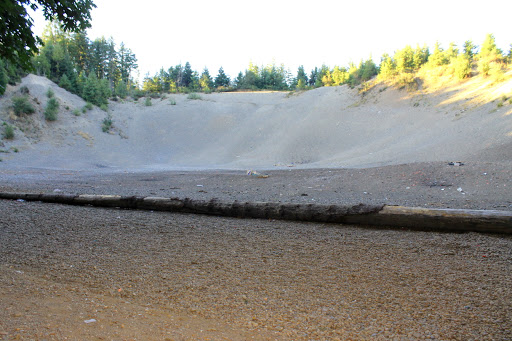 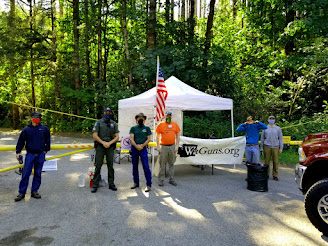 Perhaps the most fun, and most informative, part of the day was a visit with DNR Police officer J. Bodine.  He shared his experiences of everyday life as an enforcement officer and his love for the Capitol Forest since childhood.  I can see he is a real asset to WA DNR and also to the sport shooting community. 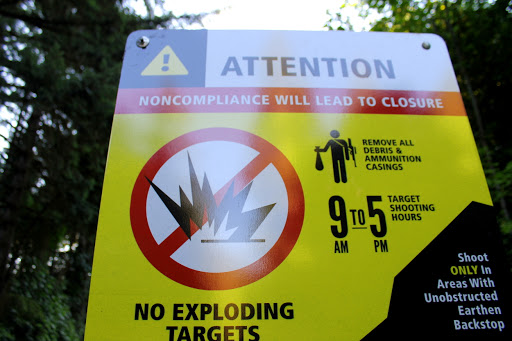 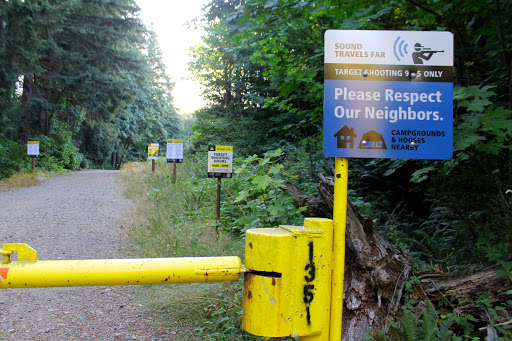 Our message got delivered after all.  Many shooters are now better informed and we hope they will help spread the message of responsible recreation.  Thank you to all who helped, shared and listened. 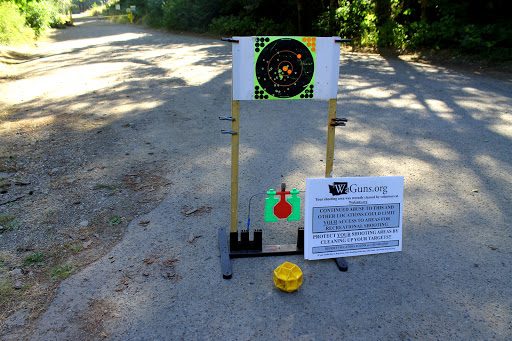 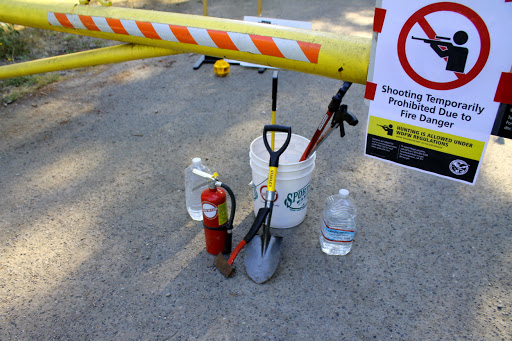 I am aware of 3 small cleanup efforts that happened this weekend. I was part of one in Central Oregon, Trash No Land Board member Gary Jacka demonstrated stewardship to his boys in SW Washington, and board members Craig & Tracy Yon had a great experience on BLM land near the Santiam State Forest, Oregon.

A target shooting couple set out to visit and clean up the Shellburg Falls area, by Mehama OR, on Saturday Aug 8, 2020 and were joined by a Bow Shooter and some Jeepers who made an unexpected turn around! Here's the story from Trash No Land board members Craig and Tracy Yon of Albany, OR...

"We spent most of the morning in the Shellburg Falls area out by Mehama cleaning up shooting areas. Mainly BLM land that borders the Santiam State Forest. 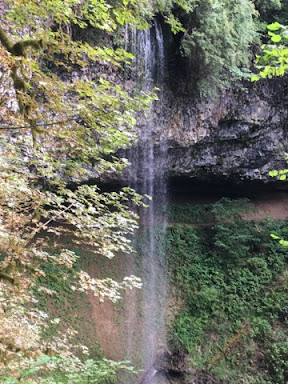 It was a great morning in the woods. Some wildlife, people practicing archery, a couple Jeeps 4wheeling along with some mountain bikers.

Picked up the first landing, which by some standards wasn't horrible. 2nd landing was a lot worse. The gentleman practicing with his bow stopped to help. Filled a few big bags. Great guy.

About that time the Jeep people came by and asked if we had seen the lower road. We said that we were warned about a transient camp and avoid it. He said they were gone but there was about 15 big trash bags left. We said we would head done there next.

For a few minutes I thought they took off after they told us about it. But they showed up and helped load everything. Talked with them a bit about Trash No Land and other subjects. Really would like to commend them for coming back. They were leaving but came back to help because he really liked what we were doing and thought it was neat pulling the trailer. He said he is going to start doing the same in places. 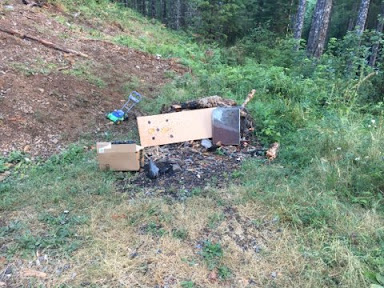 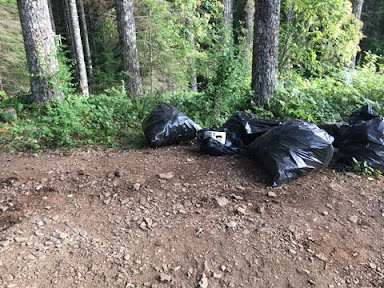 With the cleaning done and trailer full we decided to find the falls which we failed to do the first time. Got lucky and the gate was open. 2.5 miles down a logging road and a 1/2 mile hike and we found the falls. 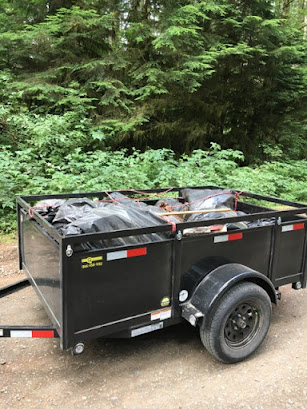 Also want to Thank the Bureau of Land management for being able to dump in their dumpsters at a campground and the 2 big boxes of trash bags."

Craig and Tracy had pre-arranged with BLM to use the dumpsters at the campground, which the BLM had previously extended the invitation to them. Thank you BLM Oregon! And thank you, Craig & Tracy, the Bow shooter and the Jeepers!

This weekend, in the Yacolt Burn State Forest, WA, a Trash No Land Board member did this...

"I took some family shooting up in the Burn this morning. Picked up a few bags of junk when we were done. Was a pretty busy day up there. Also had the new forest warden drop by making sure we were legal."

Sorry, no pics on this one. Just another report of a shooter stepping up to demonstrate stewardship and teach his kids about being responsible in our great outdoors.

Thank you Gary Jacka of Vancouver, WA! Good to hear of you teaching the next generation how to be responsible! Nice work! 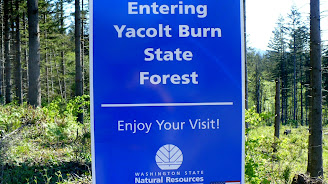 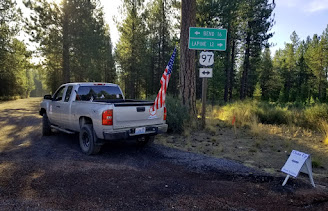 Half way between Bend and La Pine was the scene of another Random Act Of Cleanup this weekend, by five guys on a mission!  Here's the story, written by Yours Truly:

"We cleaned up 2 target shooting sites in the forest.

It's surprising how much of a difference a few people can make in just a couple of hours. We spent a casual 2 hours and got a full pickup bed from two sites. During that time, we made new friends, contacts and lasting memories.

With such a little effort and cost, we had a lot of fun, as you'll see in the pics." 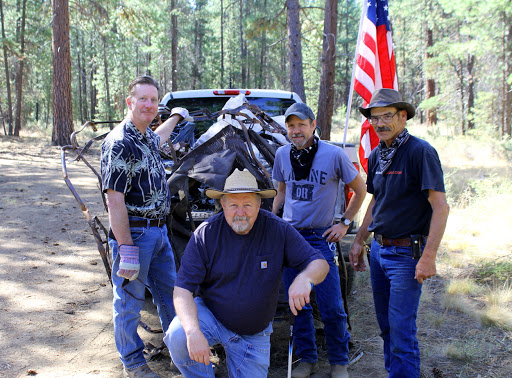 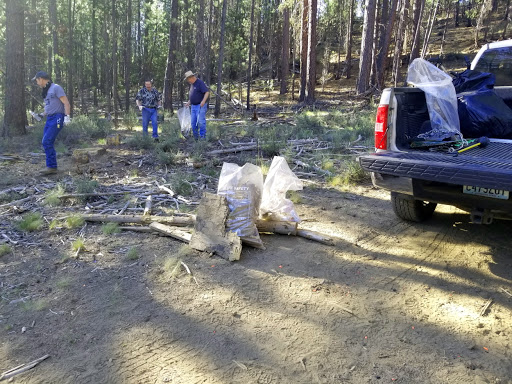 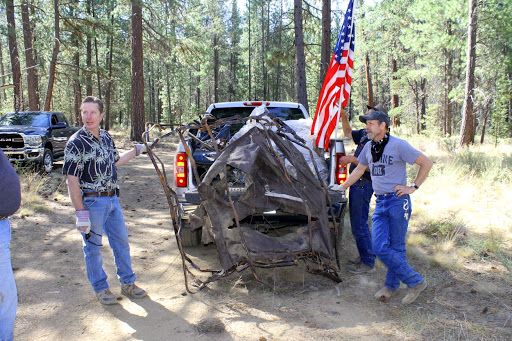 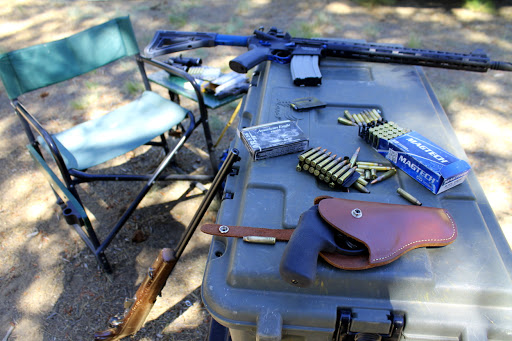 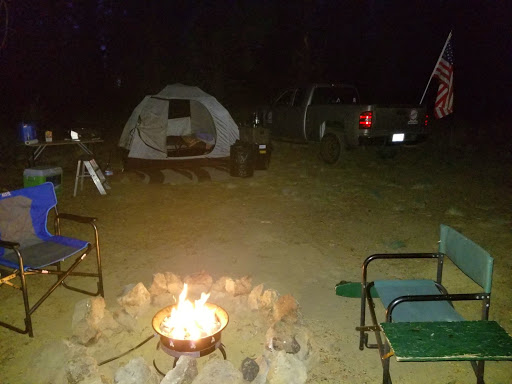 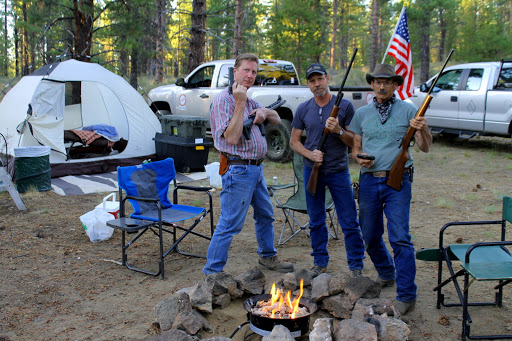 "If we had divided up the cost of disposal, it would have only cost $ 2.80 each! At that rate, and all the other benefits of a Random Act of Cleanup, why not do this more often? A lot more often!!!"

Send me pics and a story of your Random Act Of Cleanup!  I would love to share them as encouragement to others to do the same in their favorite public lands.  I also let the forest agency know about individuals cleaning up shooting sites.

Be safe, have fun and Trash No Land!