Steve Williams, a member of Trash No Land, put out a call for help, on the website forum NorthwestFirearms.com, to go clean up the North Fork Wolf Creek Rd shooting lanes in the Tillamook State Forest and six good stewards joined him.  Other shooters, who were already shooting at the lanes, saw their good work, paused their recreation time and lent a hand.

Steve tells us they were able to do a fair job on lanes 3 and 4 but couldn't get the trash at lanes 1 & 2.  They removed 33 bags of trash, three tires, several plastic bins and a hamper, some various pieces of wood, and one really shot up 50 gallon drum lid. It filled two pick ups and the back of a Subaru wagon. All of this off of just two lanes. They were able to get a quick look at lanes 1 & 2 earlier, and while they can certainly use some cleaning, they weren't anywhere near that bad. At least half of the trash taken off of both Lanes 3 & 4 appeared to be non-shooting related dumping. Mostly household trash.

They found this in the parking area at lane 3:

They also found pretty much the same household items dumped across from lane 4 (including a computer monitor and three tires).

The guys that were shooting on lane 3 took a break, grabbed some bags, and lent a hand.

They got a group photo on lane 4 along with the two gentlemen, already at the lane, who proactively joined the clean up. Like the people on lane 3, everyone they met out shooting very much wanted to get involved in volunteer efforts at the lanes.

The disposal cost was shared among the volunteers. 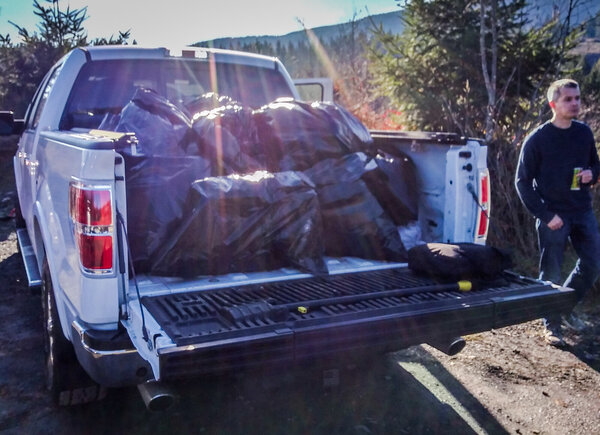 This is the kind of effort we love to see and highly encourage!  A simple shout out for help and great things can happen.  Thank you all for your share~n~care of our great outdoors and the shooting sports on public lands!
Posted by Bills' Blog at 12:23 PM